Lean... Be Inspired... Join The Conversation

Ten FREE Things Artists Should Do in NYC This Summer

By Grace Freeman
Have you come to NYC this summer to study acting or dance? Or perhaps you're a performer feeling "stuck" in the city while your friends go off to work summer stock jobs? Either way, it. is. summer. Specifically, it's summer in THE city! The city is bursting with things to do, and you don't have to break the bank to seize the day. We challenge you to turn New York City into your oyster and take advantage of the multitude of events to satisfy all areas of your creativity. Here are our top picks:

1. Take a dance class during NYC Dance Week.
During June 19-28, 2014, NYC Dance Week takes place. It’s a 10-day festival of FREE dance, fitness, and wellness classes at various locations throughout NYC, like Mark Morris Dance Center, The Ailey Extension, and Power Pilates. The ole excuse of “I can’t afford to take class today” isn’t an issue anymore! At least for a week or so…

2. Get tickets to Shakespeare in the Park. 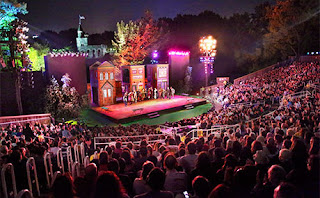 It’s a beloved NYC tradition! This summer, in the Delacorte Theater in Central Park, Much Ado About Nothing (June 3-July 6) and King Lear (July 22-August 17) will play. See classic theater, with celebs such as John Lithgow (starring as King Lear), under the stars. Part of the fun is getting to the park early with a friend and some good snacks to wait in line to get tickets. 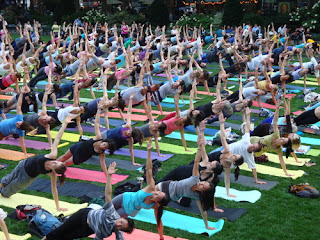 Why not do your sun salutations outside??? Athleta sponsors free yoga classes twice a week in Bryant Park with teachers from YogaWorks. Easily accessible in the heart of midtown, you can find some namaste before heading to class, auditions, or the beach. Classes take place Tuesdays/ Thursdays May 20 - Sept 18 in Bryant Park.

4. Go see Kara Walker’s Public Art Exhibit in Brooklyn.
You should actually run to this installation before it closes on July 6th. Head to Williamsburg’s Domino Sugar Factory where Walker created a huge sphinx-like sculpture and other smaller surrounding figures made completely out of sugar. The factory is shut down and under construction, but the exhibit is open Fridays 4-8, and Saturdays and Sundays noon-6.  This old spacious factory will overload your senses- the light seeps in through the high windows, the walls have a hundred years of decay on them, and it still smells quite sweet (you’re not allowed to touch/taste anything). The work is titled: “A Subtlety or the Marvelous Sugar Baby: an homage to the unpaid and overworked Artisans who have refined our Sweet tastes from the cane fields to the Kitchens of the New World on the Occasion of the demolition of the Domino Sugar refining Plant.” If you’re there on a Saturday, walk up a few blocks and grab some snacks after at Smorgasburg along the water.

5. Let the sun go down while taking in a NY Philharmonic Concert in the Park. 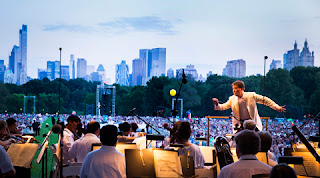 During one week this summer (July 9-15), the NY Philharmonic will play free concerts in the park…in every borough! You can see them in Prospect Park, Brooklyn; Cunningham Park, Queens; Van Cortlandt Park, Bronx; Central Park; and Staten Island! There’s nothing quite like spending a few hours with chatty picnic-ers from all walks of life settled into their sections of the grass they staked out after work. And there's nothing like hearing the hush come over the crowd when the classical music starts, the sun burns down in the horizon, and the stars come up. It's as though a magical spell is cast over thousands of people. (And maybe there are fireworks if you stick it out til the end!)

6. Stroll on up to the MET Roof.
Although they do have a suggested donation for admission, admission to the MET is actually free. Our suggestion: escape the summer heat for a few minutes and head inside the museum, soak up some classical fine art, and then go up to the European Sculpture and Decorative Arts galleries on the fifth floor. There you'll find an amazing outdoor rooftop cafe, an undeniable panoramic view of the city and a martini bar. Why wait in line to go up to the top of Rockefeller Center or the Empire State Building when there’s a much more pleasant, lest touristy view of the city available for free?

7. Dance under the moon!
On Sundays starting at 6:30pm (7/13-8/10) at Pier 84, receive a free dance lesson and then get your salsa or swing on to a live band into the wee hours of the night. If that is not enough for you, you dance machine you, hit up Lincoln Center’s Midsummer Night Swing. They sell tickets for $17 to get on the dance floor, although rumor has it, much of the dance community takes it to the street and dances outside of the official dance floor for free!

8. Catch a performance of Broadway in Bryant Park during your lunch break. 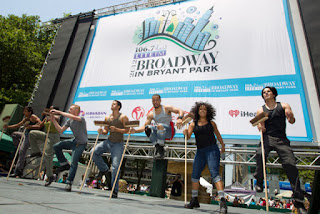 Casts from the most popular Broadway and Off-Broadway shows perform their famous numbers Thursdays 12:30-1:30 July 10th - August 14 on the Bryant Park Lawn. Now that's a pick-me-up during your lunch break.

9. Attend Chelsea Art Walk.
On July 24 from 5-8pm hundreds of Chelsea galleries will be open for their fifth annual Chelsea Art Walk. You can peruse through unique summer exhibits, chat with the artists, and did we mention there will be free wine and cheese? This is a special evening to check out some of the coolest art venues in the city.

10. And Enjoy a Movie in the Park.
Last, but certainly, not least, you can’t forget to take a in a classic movie in the park! It’s a NYC summer tradition! It is such a fun experience, and you don’t have to pay for the movie ticket. You can pick out your favorite movies to go see, or take in an old film you’ve never heard of- your choice. And there are so many to choose from: HBO Bryant Park Summer Film Festival, Hudson River Park’s River Flicks on Pier 63 Lawn; Intrepid Summer Movie Series, Front/Row Cinema Series at the South Street Seaport, or Syfy Movies with a View at Brooklyn Bridge Park.